Kerstetter was last seen on Saturday, September 12, 1987 at 11 p.m. when reporting for his weekend shift. He worked as a maintenance man and a security guard at Corning Glass Works, an 112,000 square foot electronics manufacturing plant in Bradford, Pennsylvania. The next morning, September 13, a fellow security guard, John Lindquist, found Kerstetter's lunch pail, newspaper and keys on a cafeteria table.


Security guards at the plant were supposed to check in with the headquarters desk in Corning, NY every hour during their shift.  It was discovered that Kerstetter never checked in that night.  Corning claims that a new employee was working the check-in desk that shift and was unfamiliar with the protocols.


A police dog from the Cattaraugus County (NY) Sheriff’s Department was called in.  It traced Kerstetter's scent to the second floor of the plant where the glass furnace was located. This area was not part of Kerstetter's normal security rounds. They discovered that approximately $250,000 worth of platinum pipe was missing. The platinum was used in the manufacturing of electronic components.

There has been much speculation over whether Kerstetter was a murder/kidnapping victim or a willing accomplice to burglary.  Investigators have stated that Kerstetter had recently taken a $5000-$7000 pay cut due to cutbacks at the plant, and was said to be $30,000-$40,000 in arrears on various payments.  His family has stated they believe that his debt was manageable, and that he also had investments in the company.  They also do not feel he would have just disappeared, since he was close to his 6 daughters and his son, as well as his 2 grandchildren.

This case remains unsolved to this day.

An external discussion board about this case

This link is not associated with McKean County Cold Cases.  However, it contains over 34 pages of many interesting theories and discussions about this case.  It also includes posts from Kerstetter's own daughter.

This case was featured on the television series Unsolved Mysteries (aired originally during season 2, episode 5 on October 25, 1989, and then again as episode 129 of the new series during 2008-2010).

Low quality video submitted by a website visitor (note: all scenes are reenactments)

Download File
Quotes from key people in this case

By all accounts, Dale was an ordinary man who was loved by his family and respected by his employer. His son, Al, remembered him as being very compassionate:

"He's just a great father.   I mean, there wasn't a kid in the world that wouldn't want to have him as their dad."

On Sunday morning, September 13 th, security guard John Lindquist arrived at 7:00 AM.   He expected to find Dale waiting to be relieved:

"He usually sat right inside the door and he wasn't there.   So I walked in the cafeteria and I see his lunch pail sitting on the table.   I happened to pick up the newspaper and there were the keys.   So then I looked in his lunch pail, and I see that... everything was there.   He hadn't eaten."

The investigation next focused on the three security cameras that monitor the factory around the clock.   Personnel manager, Patrick Foley, was disturbed by what the cameras had recorded:

"The first thing I saw was a masked man in the back of the plant in the one area.   When I saw the masked man on the tape, I was very alarmed.   At first I thought... there's been some foul play, Dale's involved in foul play, and he probably is missing.   And then Dale Kerstetter came back and met this masked person in the back of the plant.   I had a very empty feeling in my stomach.   I said, 'What on earth?'   And then, as I continued to review the tapes, I saw the masked person come back out and go up to the tank area, then I was extremely anxious because at that time I realized that not only do we have a missing employee... there was a good possibility that we had missing platinum in the plant.   Whoever removed the platinum from the tank was extremely familiar with the plant, everything in the plant--they knew exactly where to go."

Police could not tell if Dale was being coerced or if he was part of the heist.   At one point he looked directly into the camera.   Was Dale signaling for help?   Or was he coolly flaunting his crime?   Patrick Foley was sure he knew the answer:

"I think the fact that he did everything in front of the cameras was once again just Dale Kerstetter saying to us, 'Look, hey, here I am.   I'm taking your platinum and there isn't a thing you can do about it.'"

However, Wendy Kerstetter believed her father was an innocent victim.   According to her theory, Dale heard or saw the masked intruder and went to investigate:

"If he had planned on taking off anywhere, why would he bother packing a lunch? I mean, just little things like that.   And a whole carton of cigarettes, and he smoked all the time.   I mean, he would've taken his cigarettes."

Another theory places Dale at the center of a bold and premeditated robbery.   Inspector Max J. Bizzak of the Pennsylvania State Police was one of the lead investigators on the case:

"Through our investigation we determined Dale Kerstetter was approximately $30,000 to $40,000 in arrears on various payments--trailer payments, vehicle payments and, different bills which he had owed throughout the area."

Whether Dale Kerstetter committed the crime or not, his daughter Wendy and the rest of his family are anxious to know if he is still alive:

"He had six kids, two grandkids.   And to do something like that and take off, and not call any of them--you know, just take off and never talk to your kids again? I just... can't believe it." 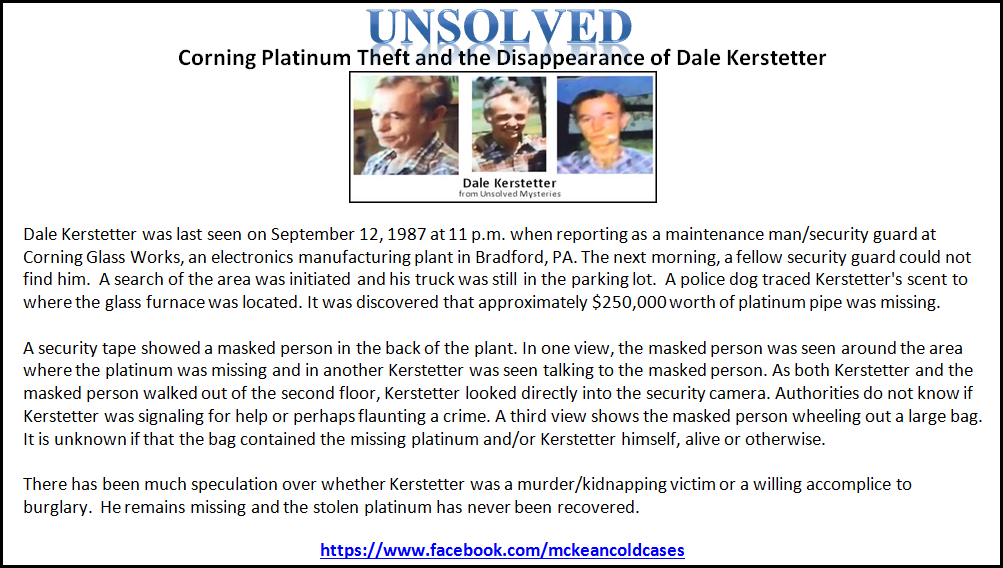 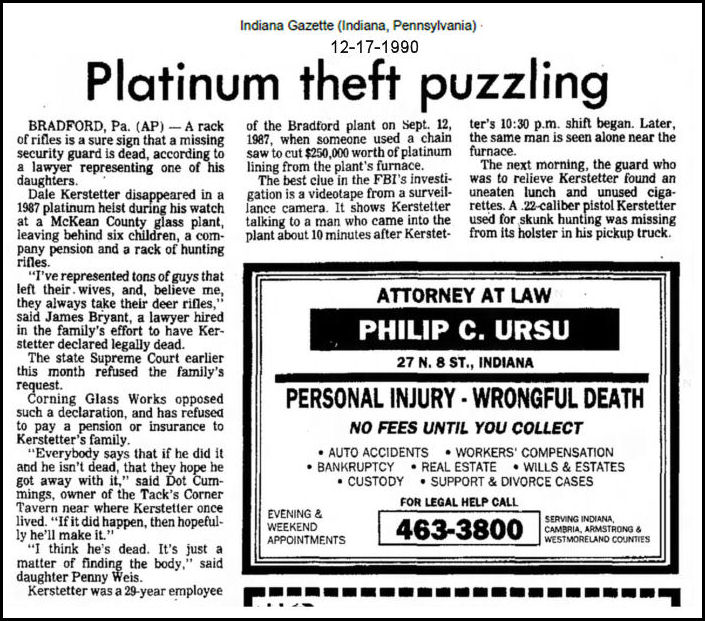 The family's appeal to have Kerstetter declared legally deceased was initially rejected  (12-04-1990):
However, in July 2014 his daughter posted online that a judge had finally declared Kerstetter legally dead.