Four year old Marjorie West (many accounts also spell it as Marjory) attended a church service with her family members in their hometown of Bradford, Pennsylvania during the morning hours of May 8, 1938. Her parents decided to have a Mother's Day picnic afterwards in the White Gravel area, which at that time was an approximately 40-minute drive from their home at 5 Cornen Street in Bradford. They drove south along U. S. Route 219, following an old railroad grade from Custer City to Marshburg, Pennsylvania. The Wests entered the White Gravel area from Chapel Fork Road in McKean County.

When they arrived at the White Gravel area, Shirley West, Marjorie’s father, went fishing in the nearby stream while Mrs. West sat in the car along the Morrison-Marshburg Road.  Marjorie picked wildflowers (violets according to some accounts) with her eleven-year-old sister, Dorothea, who later recalled that their parents warned them against walking behind a large boulder near the flowers. She said their father and brother checked the area, but there was still a chance that rattlesnakes were hiding near the rock.

Dorothea left Marjorie alone while she spoke to their mother at approximately 3:00 p.m. Marjorie disappeared by the time her sister returned to the area. When they could not locate her, the family drove to the nearby town of Kane to get help.

Witnesses reported that two vehicles drove past the West’s picnic site prior to Marjorie's disappearance. Authorities identified the cars and neither was involved in her case. At first it was believed that ﻿﻿Marjorie had merely wandered into the woods and became lost or was found by a passerby and taken safely to a nearby town. When that turned out not to be the case, hundreds (later thousands) of people began the search for Marjorie.  These included oil lease workers, Civilian Conservation Corps staff, the Pennsylvania State Police, other Pennsylvania and New York police officers with bloodhounds, National Guard troops, and even volunteers by airplane.

Many people scoured the forest around the clock for Marjorie for several days.  There were stories about searchers finding what appeared to be a freshly dug grave deep in the woods, but that it turned out to be a buried cask of wine. There was another about a scrap of lace being discovered, however Marjorie did not have any lace on her clothing when she disappeared. There was yet another story about someone finding a handful of violets, a small footprint, and a single galosh.  Regardless, no indications of Marjorie's whereabouts were ever found.

Her disappearance received a great deal of publicity across the nation. A taxi driver in Thomas, West Virginia claimed that he saw a weeping girl matching Marjorie's description and wearing similar clothes riding in a dark green sedan with an unidentified man in his thirties. The sighting took place at 11:38 p.m. on the night of her disappearance.

The driver said that the individual said the girl was his daughter and asked the taxi driver where the nearest motel was located. The driver directed him to an establishment across the street. The man left the child in the car and went inside the hotel, but there were no vacancies. The man returned and inquired about a local liquor store. The driver instructed him to stop at a bar down the road. The taxi driver identified Marjorie as the man's passenger several days later. A man matching the description of the unidentified individual refueled at a gas station outside of Thomas and an attendant reported seeing a bundle wrapped in a gray blanket in the backseat of the car.

Investigators determined that the approximate travel time along U. S. Route 219 between the White Gravel area and Thomas, West Virginia was eight hours. If the individual abducted Marjorie around 3:00 p.m., they would have arrived in Thomas by 11:00 and 11:30 p.m. that evening. It has been reported that authorities were never able to confirm the identity of the man or the child.  However, on May 12, 1938, the Hutchinson News (Hutchinson, KS) quoted City of Bradford Police Chief Edward Edmonds as saying that this theory was discounted as the West Virginia State Police indicated the man was a "motorist accompanied by an adopted daughter."

There was plenty of other speculation about what happened to Marjorie.  Some believed she was taken to Canada by other family members, while some people theorized that she may have been abducted and taken somewhere else.  There is also the possibility that she may have fallen down an abandoned oil well near White Gravel.  This region was heavily drilled for oil and there were numerous abandoned wells scattered throughout the area (see article below from the Kane Republican, date March 10, 1962).

Additional speculation pointed towards the Tennessee Children's Home Society near Memphis, Tennessee. The facility was operated by Georgia Tann, who was initially lauded for placing at-risk children in adoptive homes. Authorities eventually learned that Tann had kidnapped over 1,200 young children during the years 1932 through 1951. The majority of victims were abducted from states bordering Tennessee, although some children resided in Connecticut.  Judge Camille Kelly approved Tann's custody bids for the majority of the victims. Tann placed most of the children with childless couples in New York City, New York or Los Angeles, California. None of the theories have been proven and no one has been implicated in Marjorie's disappearance.

Ironically, 28 years earlier on April 26, 1910, two young boys from nearby towns also disappeared without a trace.  Just eleven miles from where Marjorie vanished, 7 year old Michael Steffan disappeared while fishing in Ludlow.  The same day nine year old Edward Paul Adams disappeared about 19 miles away from White Gravel while fishing in Lamont.  Neither boy was ever located.

Dorothea (who is now deceased) is said to have a strong resemblance to Marjorie.  Her photos are posted below:

Article from the 80th anniversary of her disappearance 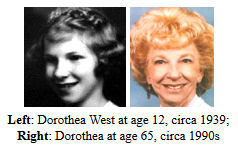 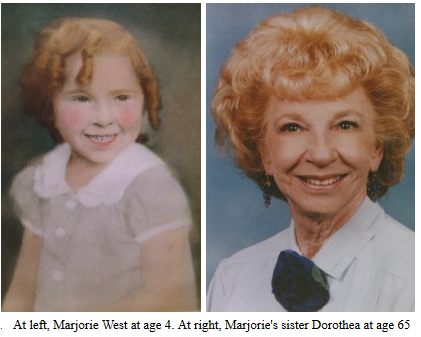 Her case remains unsolved to this day. 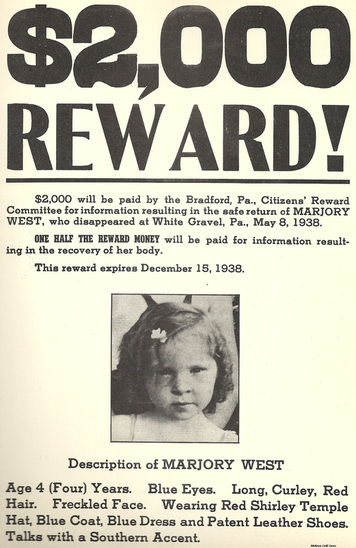 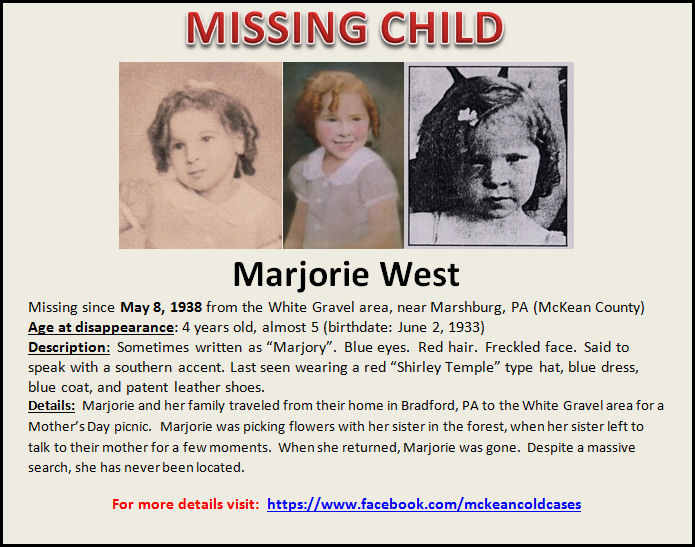 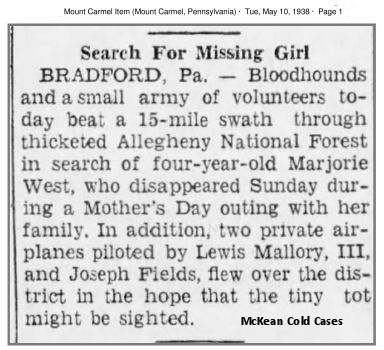 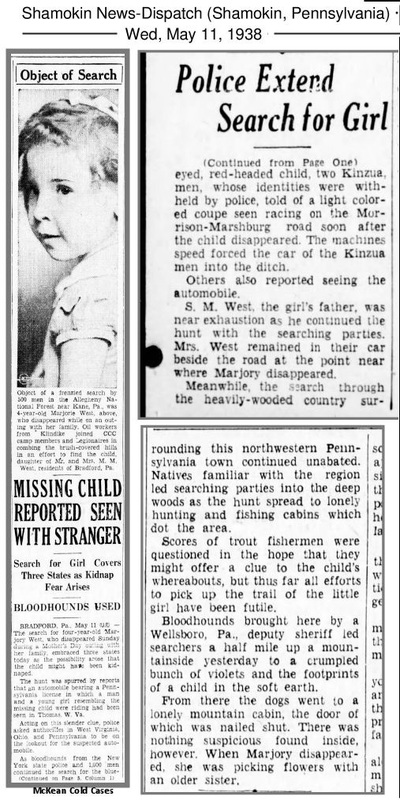 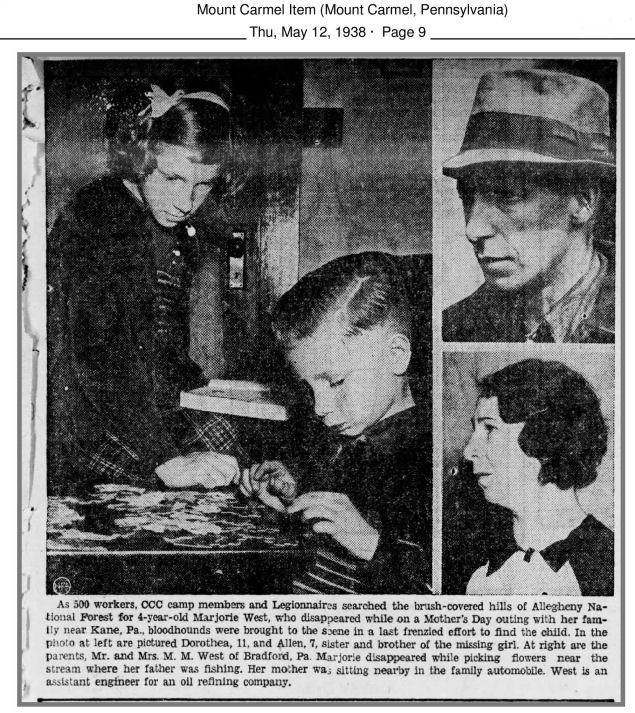 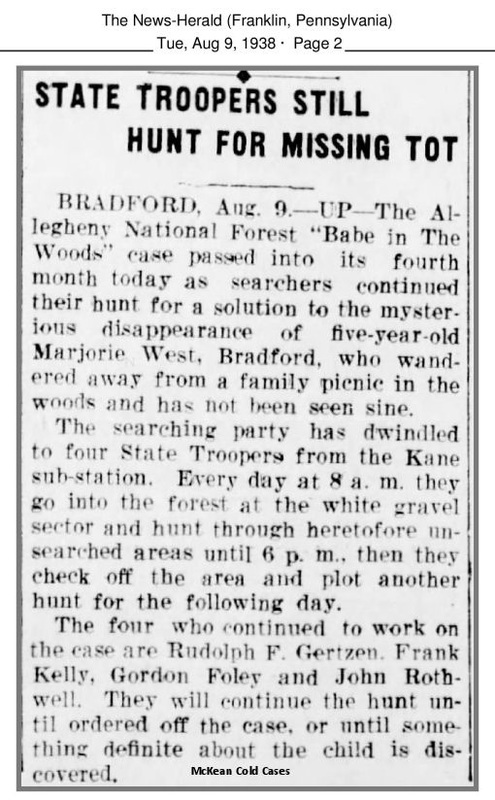 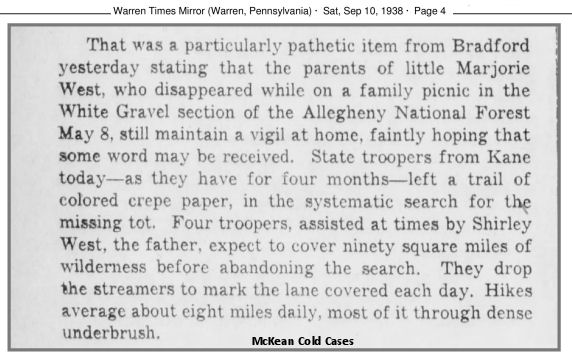 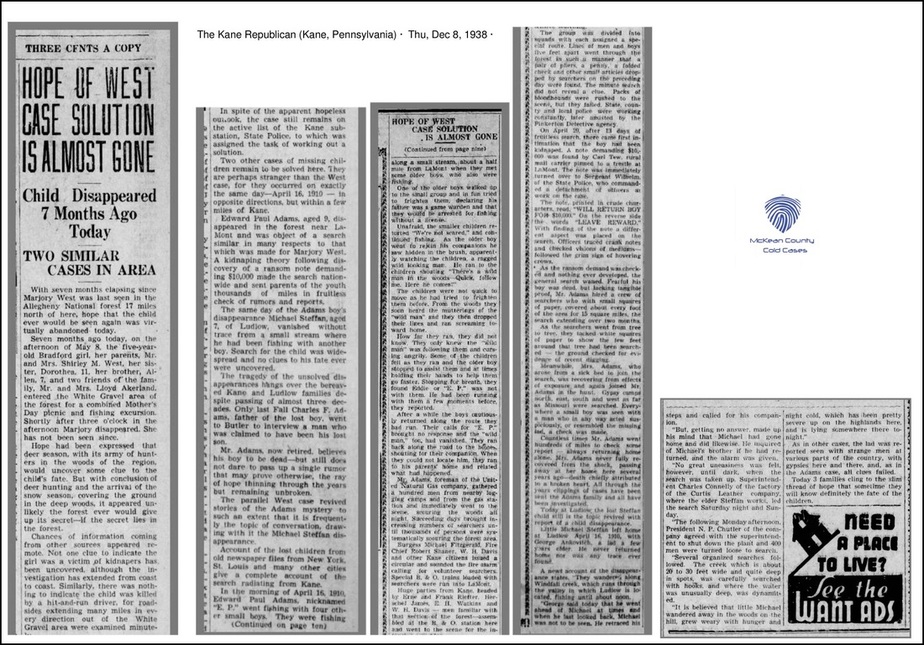 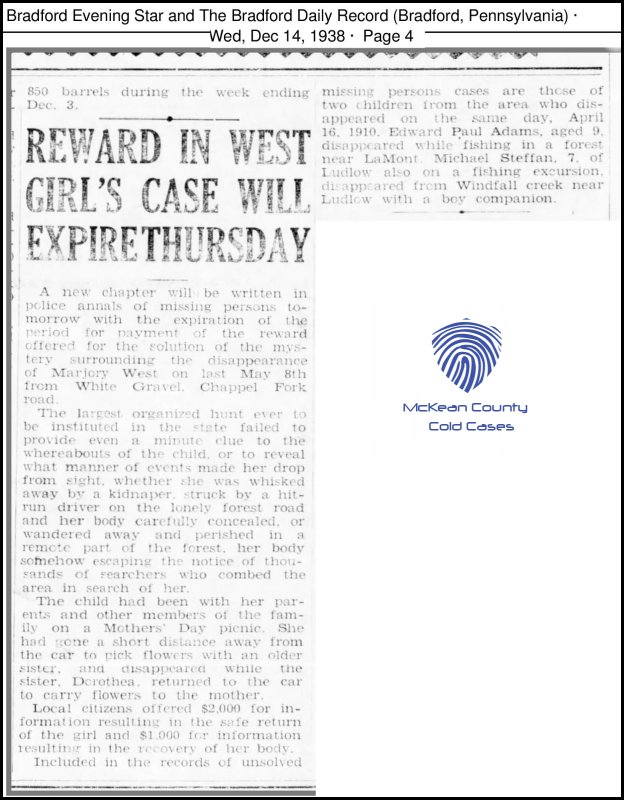 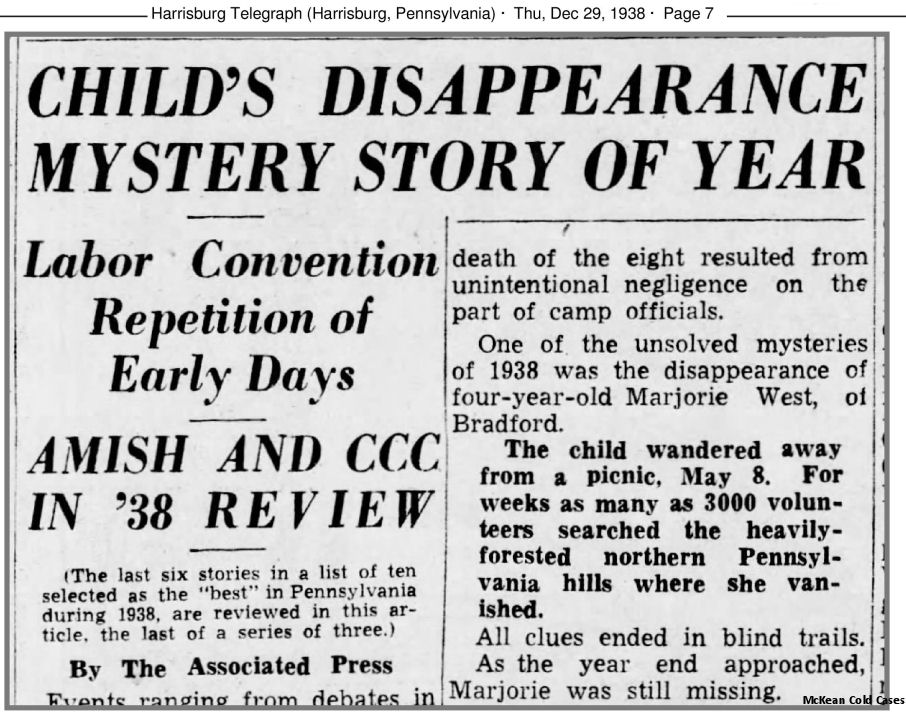 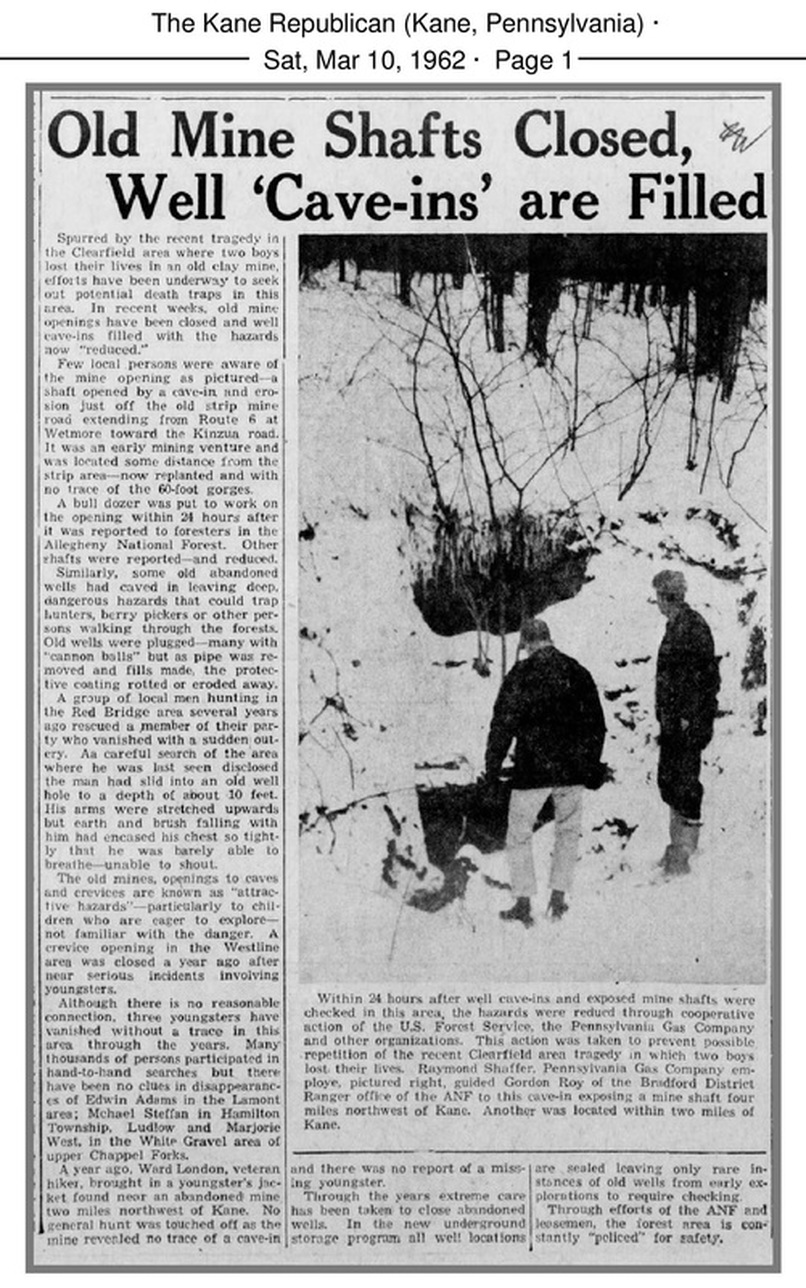 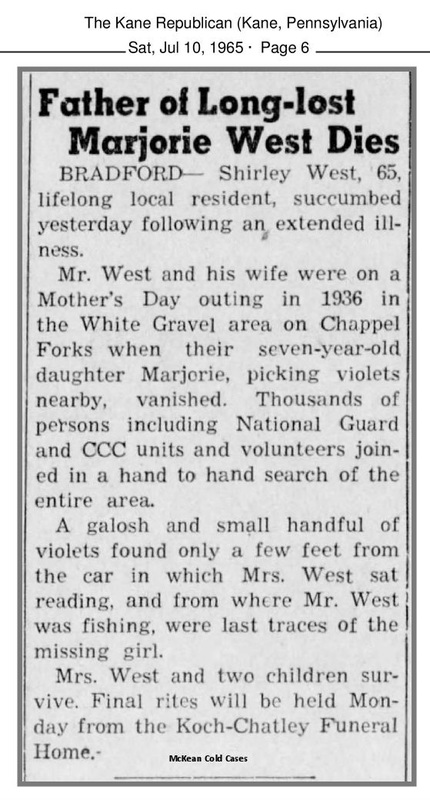 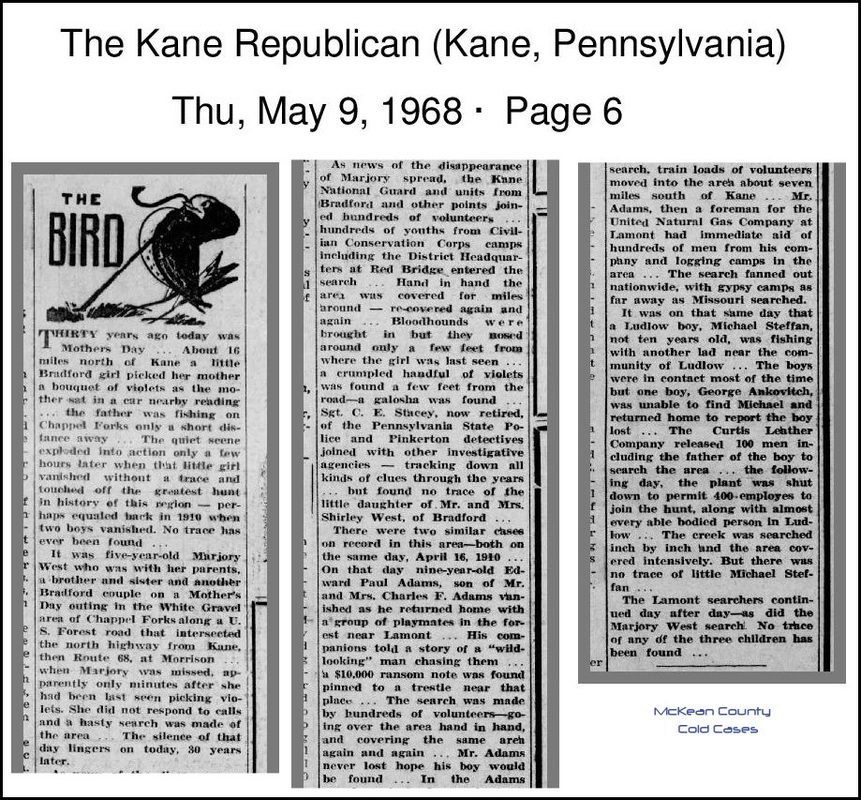 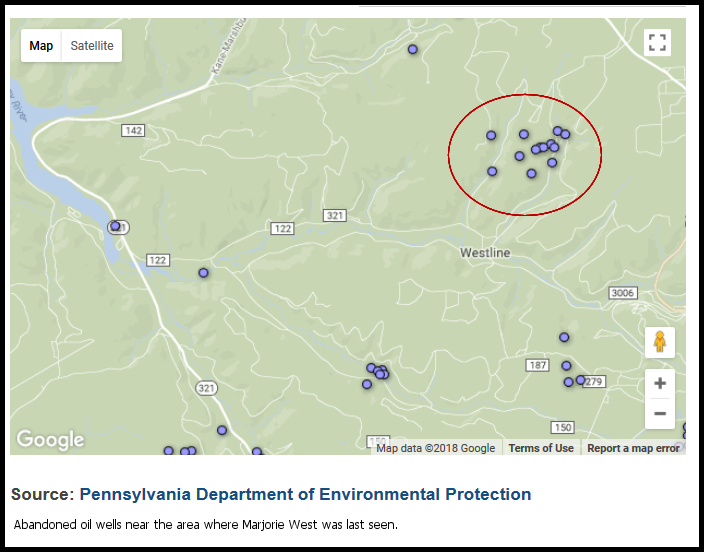 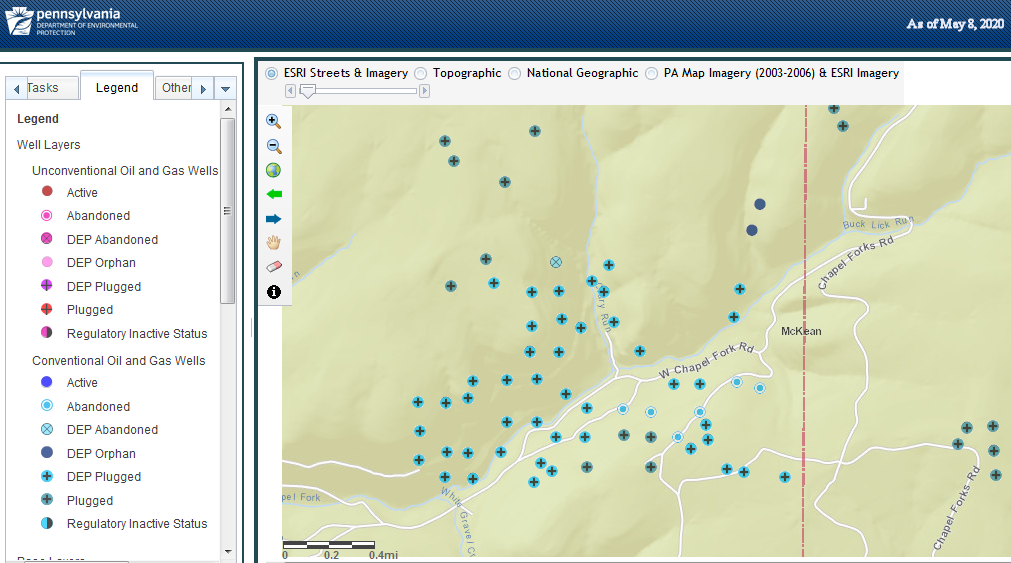 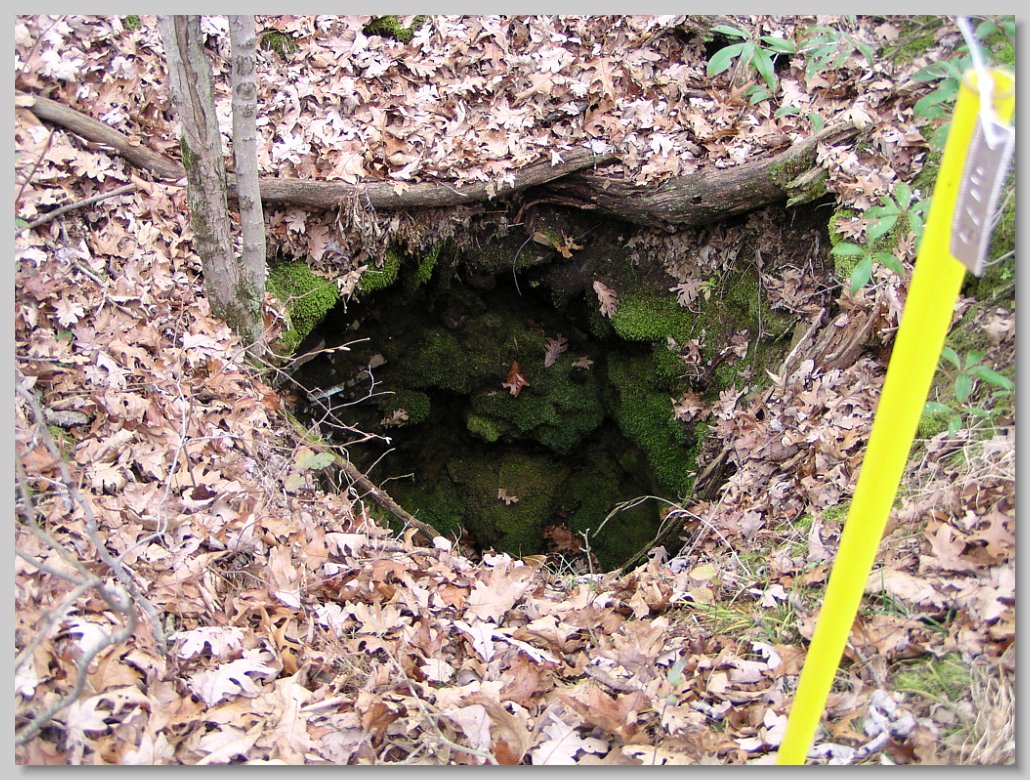 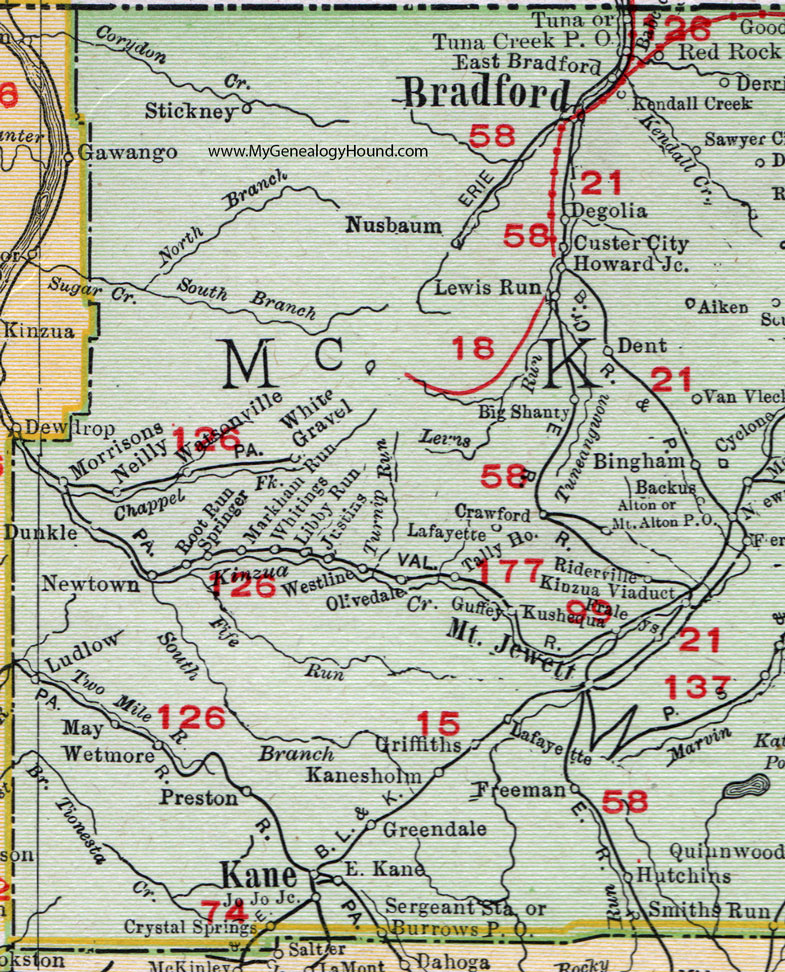 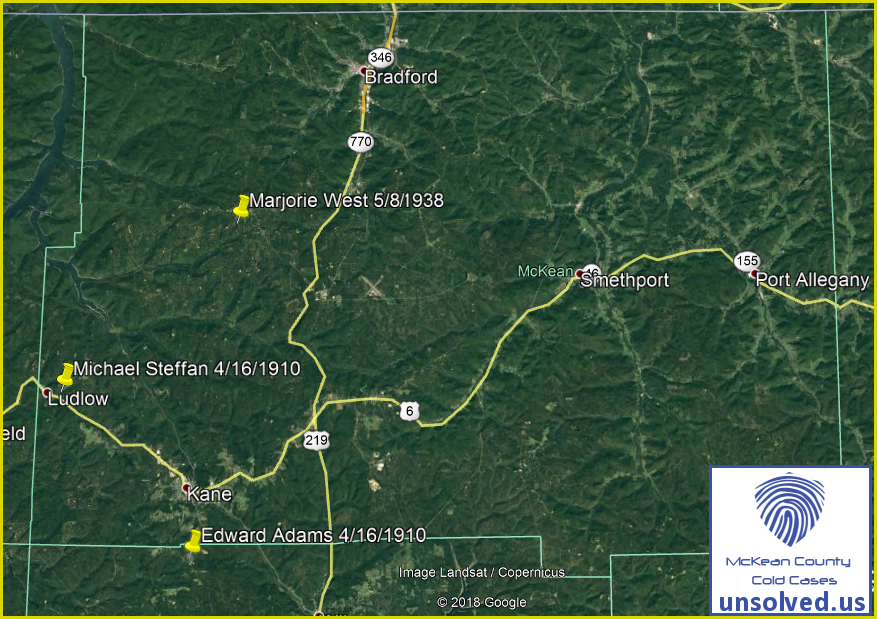