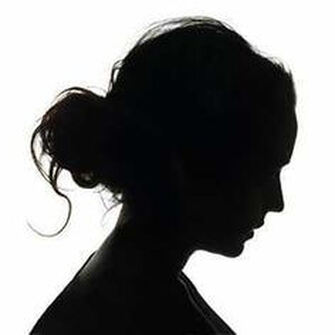 Vital Statistics
State of Remains: Only the calvarium (skull cap) was recovered
Estimated Age: Likely a younger adult
Estimated Time of Death Updated in 2016: Greater than 2 years, but likely less than 30 (possible time range: 1961-1989).
Cause of Death: The skull appeared to have been pierced by a bullet
DNA Status:  In the FBI's Combined DNA Index System (CODIS)

Case Details
In the fall of 1991, a local woman was walking through the woods near Mount Jewett, Pennsylvania when she found a piece of bone that she thought might be human remains. She was is in the vicinity of the old Pennsylvania State Police barracks located along U.S. Route 219, approximately 1 mile north of Lantz Corners (today the site of a beer distributor).

Unsure if it was human, she took the remains to the anthropology department at the nearby University of Pittsburgh at Bradford.  They identified the remains as a human skull, and sent it to be examined by famed forensic anthropologist Dr. Dennis Dirkmaat at Mercyhurst University in Erie, Pennsylvania. He determined it was a human calvarium (skull cap) of a white female and “the pattern of cracking on the skull is characteristic of a gunshot…the edge of the hole is almost perfectly semicircular.”

On Friday, May 8, 1992, a search of the area was conducted by the Pennsylvania State Police, Lafayette Township Volunteer Fire Department, and the Cattaraugus County (NY) Sheriff's Department K9 unit.  No additional remains were found.

In 2016, Dr. Dennis Dirkmaat provided unsolved.us an updated range for the time of death.  He stated that the skull had been there greater than 2 years, but likely less than 30 years.  This gives a possible time range of 1961-1989.

That same year, her DNA was uploaded to the FBI's Combined DNA Index System (CODIS).  There were not any matches in the system.

If you have any information about this case, please contact:
Pennsylvania State Police-Lewis Run
at  814-368-9340

Map of Area of Discovery

According to a post on our Facebook page (McKean County Cold Cases)﻿﻿, Chief Fowler of the Lafayette Township Vol. Fire/Rescue Department stated, in 1992"...we assembled at the old PSP (Pennsylvania State Police) building on 219 by the beer distributor and searched that area around the barracks. It was in this area that the skull was found."

Mt. Jewett Jane Doe's remains were recovered in the area of the old Pennsylvania State Police station (1 mile north of Lantz Corners) along US 219.  The Crescent Beer Distributor building was not there in 1991.

NOTE TO INDEPENDENT SEARCHERS:  Do not access this area without the proper permission of any landowners.  If you find any items which you think might be related to this case, do not disturb and call 911 or the Pennsylvania State Police at 814-778-5555 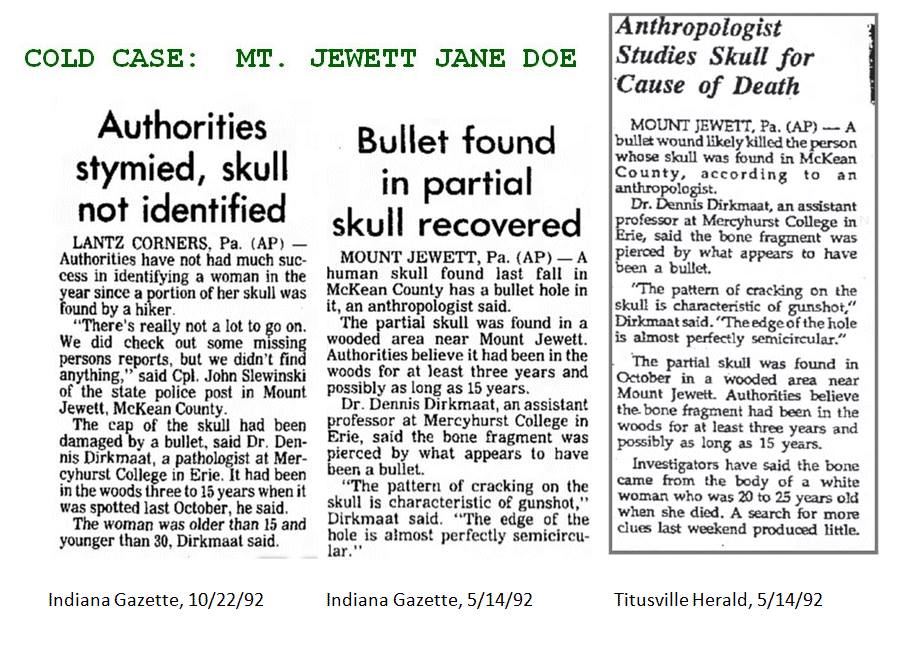 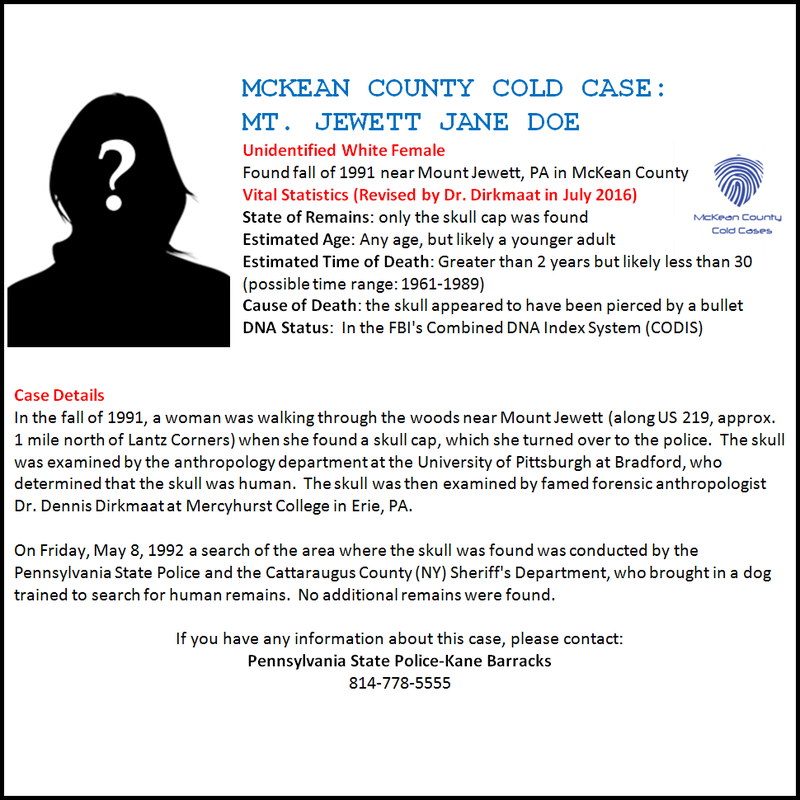 Original Poster (has been replaced) 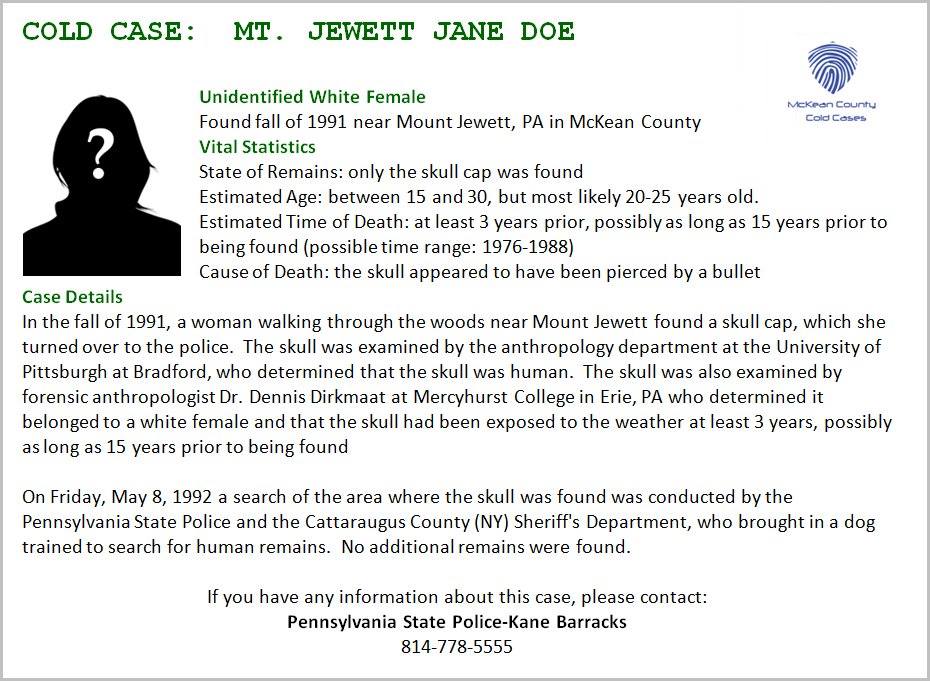 UPDATE FEB. 17, 2016:
NamUs, the Department of Justice's ﻿National Missing and Unidentified Persons System﻿, has changed the DNA status of Mt. Jewett Doe from "Sample Available: Not Yet Submitted" to "Samples Submitted-Tests Not Yet Complete"

There is a tremendous backlog for DNA testing. Hopefully soon the DNA will be extracted and compared to the national database. Will update as information becomes available.

UPDATE JULY 20, 2016:
After some encouragement from McKean County Cold Cases, NamUs, the national unidentified persons database, has sped up the DNA testing and has changed Mt. Jewett Jane Doe's DNA status to "Sample submitted - Tests complete." Her DNA information is now in the FBI's Combined DNA Index System (CODIS).  Hopefully a match will be found soon.